Fantastic Mr. Bruce: Why we don’t ever give up on love.

Instagram is amazing for so many reasons, but right now my favorite part about it is how it connects us to people (and animals!) we might have never met had it not been for this incredible tool. I’ve been upping my Instagram game over the past few months because this is the place where I get to learn some wonderful stories about people and the animals they love. I am a sucker for stories about animals. I cannot get enough of them. I remember spending hours as a child reading books that were real stories of the animals people had in their lives. I connected with each story, but the ones that were accompanied by a photograph really hit me in the heart.

I recently learned a story about a little rescue dog here in Seattle whose mom, despite learning he had already been adopted by another family, did not give up on trying to bring him home. This little dog is Bruce, and he is amazing. Bruce’s mom, Kate, shared their story on Instagram in response to my call for stories about my followers dogs. I don’t think I can retell the story as well as Kate tells it, so I will share what she wrote( from Bruce’s perspective) here:

“I’m proud of this photo of me because I don’t think it would’ve been possible 12 months ago. It shows the confidence, strength, and determination I’ve gained.

I’m a scruffy mutt who was rescued from a high-kill shelter in California. I was so lucky to be placed in a loving foster home with @willow413 . My foster parents and their pup Charlie, brought me out of my shell and gave me security and love like I hadn’t known before. They guided me on how to walk on a leash and were patient with me when accidents happened in the house.
Unbeknownst to me, my future furever home spotted me on an adoption site. They had been looking for several months and knew the instant they saw me that we were meant for each other. When they they inquired about me they found out another family wanted to adopt me. They kept watching the site and saw the adoption was pending and eventually reached out one too many times and was told if the adoption fell through they would be contacted. Dejected they tried to move on but continued to watch my status every day. After 6 weeks with no movement they called again and found that I might be available again. Joy!
It turned out well! I met my family 2x because both my fosters and my family wanted to make sure we really were the right match for each other. There were tears when I left my fosters.
I quickly adapted to my new life with a human brother, a cat brother and a human mom. I’ve found so many joys in life including hiking, running with sticks, and playing fetch. I also know how much fuller my human’s lives are because of me. We can’t imagine life without the other.”

After reading this, and seeing how Bruce’s Instagram followers were reacting to his story, I knew I needed to meet Bruce and his mom in real life. Last weekend, I met up with Bruce and  Kate at Ravenna Park to go on a little adventure while I got to know them a little bit better. 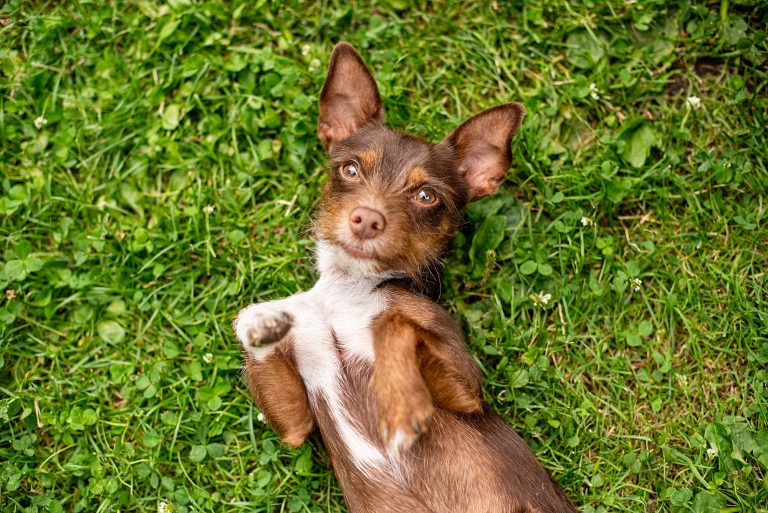 Bruce is a mix of Chihuahua and some kind of terrier. He is really something special. He has this little tuft of hair that comes to a point at the top of his head, kind of like a Troll doll, and his hairs are wiry. Soft, but wiry. His ears are very Yodaesque, which is pretty much the best thing ever. I was an instant fan on Instagram, but as soon as I met him in person, I was in love! When you check out Bruce’s Instagram profile, it’s obvious that he loves to be outdoors adventuring through the woods with his mom. When we reached the trail into the woods, he took to it like an old pro. He’s been with Kate for a year now, so it’s no surprise that he knows what to do. Bruce was also a pro in front of the camera. He gave me head tilts, he gave me adorable eyes, he had so much fun rolling around in the grass, and we had so much fun watching him.

I photograph a lot of animals in rescue who are waiting for someone to bring them home. They are incredible animals who deserve to be loved, and given a beautiful life. When I meet people who have done that for an animal that was once homeless, I just want to hug them, and thank them for the gifts they are giving. Not just to the animal they rescued, but to all of us. When Kate rescued Bruce, their story became a part of all of us. When we share our stories, we connect with one another in ways that make this world a better place to live. I am inspired by Kate’s determination and love for Bruce, and I hope that each person who learns their story will take a piece of that determination and love into their own lives. You don’t have to be the rescuer, but you can help animals find their forever homes by sharing their stories. Check out your local shelters and animal welfare organizations to learn about who needs rescuing. You just might be the key to finding their happily ever after.